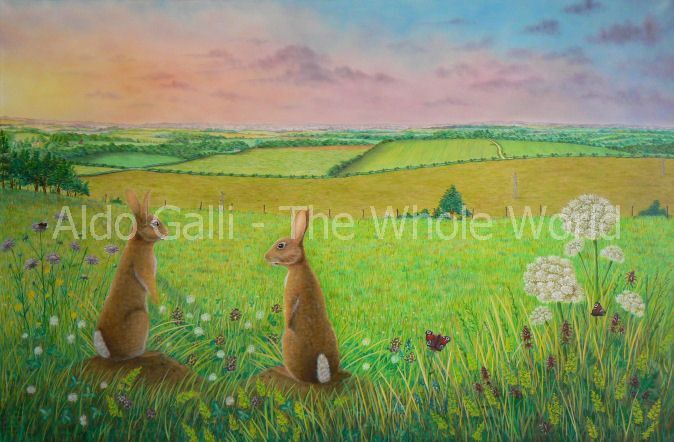 TV series
Miniseries
Strawberry was a buck from Cowslip's Warren who joined Hazel and settled in Watership Down Warren.

Strawberry is introduced when Hazel and his rabbits arrive at Cowslip's warren. He is described as large but dandy, as was typical of Cowslip's Warren rabbits. His doe, who was named Nildro-hain, was killed in a snare. When Hazel and the other Sandleford Warren survivors left the Warren of Snares, Strawberry begged to join them. Hazel agreed that he could join the group. Although Hazel notices that Strawberry has a harder time traveling, he was said to have never complained and arrived with the others when they found the Watership Down Warren. Strawberry also assisted the others with the design for the Honeycomb, as his old warren had also had a large burrow.

Strawberry, voiced by Robert Harper, is a lazy rabbit who leaves the Warren of the Shining Wires with Hazel and the others, since he likes to sleep in the burrow a lot. But later he becomes dependable after realizing that he wasn't being very helpful towards the Watership Down rabbits.

In season 3, Strawberry's color has changed to dark-pink and he has a much larger role. He has joined Bigwig's Owsla and is a skilled fighter and digger. He eventually becomes stuck under a tree during a training exercise, and is freed by Dandelion and Hawkbit. After Fiver has a vision of Hawkbit being killed, Strawberry is ordered by Bigwig to keep him in the warren at all times, pinning him to the ground and even fighting Hawkbit at one point. In The Magic, he is seen fighting several of the Darkhaven Owsla, and in the Watership Down warren when the storm takes away General Woundwort and his Darkhaven army.

Strawberry appears in the miniseries of Watership Down.

Strawberry is portrayed as a doe in this version voiced by Olivia Colman. The Sandleford rabbits meet her in Cowslip's warren, where she excitedly gives Hazel a tour of the warren and asks if they can be friends. After becoming horrified at Cowslip's attempt to stop the rabbits from saving Bigwig, who was caught in a snare, she leaves the warren to join the Sandleford rabbits.

Hawkbit and Dandelion both develop romantic feelings for Strawberry, and begin fighting over her, much to her annoyance. After being left with the two of them and Kehaar, she comes up with the idea of digging out the warren for when everyone comes back, making the two bucks help her. In a humorous moment, she digs out an entire main tunnel in the time that Hawkbit and Dandelion dig one short tunnel.

During the battle, she helps Hazel, Fiver, and Blackavar slip through the Efrafans. After the battle of Watership Down, she becomes Bigwig’s mate, and has kittens with him. She most likely felt a sense of relief, not having to deal with Hawkbit and Dandelion anymore, but she still had problems with her kittens picking up several worms to feed Kehaar.