Tales from Watership Down

Kehaar is a black-headed seagull with an Eastern European accent, that Hazel and the others helped nurse back to health after he was injured by the Nuthanger Farm cat, Tab. At first, Kehaar was cautious and wanted nothing to do with them, but in time he befriended the Watership Down rabbits and helped them with several quests. He takes a liking to Bigwig, (whom he sometimes calls 'plump rabbit'), and other straight talking rabbits like Silver, but is not fond of "clever" rabbits like Blackberry.

Because of his gregarious nature, Kehaar is prone to be quick tempered, at first unpredictable, and straight talking. He is very knowledgeable about the world, and he often confuses the rabbits by talking about things that they do not understand or cannot comprehend, such as shotgun pellets and oceans. After being cared for by the rabbits with his injured wing, he learns to be able to trust them, and takes a special liking to some of the rabbits, most notably Bigwig, who greatly respects him and often converses with him. Kehaar sometimes becomes frustrated with the rabbits, seeing them as slow and stupid, and does not like being asked to fly and search for things, instead preferring to fight or being treated specially by the rabbits. Each year, when it gets cold near the ocean, he comes back to visit the rabbits and be fed insects.

Upon finding an injured Kehaar, Hazel instructs his rabbits to find him worms and help heal him, with the idea that they can use the bird to search for other warrens so that they can find some does. Hazel asks Bigwig to talk to Kehaar about this problem, and Kehaar says that he will fly and find other warrens for them. On his flight, he tells them of the warren Efrafa, and of Nuthanger Farm and its hutch rabbits.

Kehaar leads Holly, Strawberry, Buckthorn and Silver to Efrafa and back. When Hazel was shot by the farmer, he picks out the "black stones" in Hazel's back leg with his beak. After the party to Efrafa failed, he again leads the way for Hazel and his group. Along the way, he warns Hazel of approaching patrols and about the River and the boat. When Bigwig infiltrates Efrafa, Kehaar relays messages from him to Hazel detailing his plans. During the escape, he attacks General Woundwort and several Owsla members, keeping them away from the Watership rabbits. Once the rabbits are on the boat, they shortly become stuck on one side of a bridge. Kehaar tells them to jump into the water, and they will come out safely on the other side. Hazel is mistrustful and first, but after doing as Kehaar says, he realizes that he was right and that he should have believed him the first time. After this, Kehaar returns to his homeland, promising that he will come back one day and frighten all the rabbit kits. He is mentioned a few times after the events, and Silver frightens the Efrafan Owsla by saying that he "has sent for the white bird." Woundwort also tells Bigwig that there is no White Bird to save him while fighting with him underground.

Kehaar speaks with a strange dialect, to which the rabbits do not always understand, as they can only communicate between each other using simple hedgerow talk. He was allocated a run to take shelter in, which was given the special name of "Kehaar's run." Even after Kehaar leaves, it is still referred to as Kehaar's run.

Tales from Watership Down[]

Kehaar has a minor role in this book. He returns to the rabbits the following spring, where he is asked by Hazel to search for a place where another warren could be built safely away from man.

Kehaar reprises his role from the books in the film, and is portrayed in a very energetic, looney, and silly way with an Eastern European accent, making him the film's comic relief character. However, although he tells Hazel of Efrafa, Hazel gets most of the information on it from Holly, who, in the film, was in Efrafa before finding the Watership rabbits on their new home. After the breakout from Efrafa, he leaves the rabbits.

In the animated series, Kehaar is much more friendly than in the film and book and stays with the rabbits much longer than he does in the film and original novel. Much like the film, he has moments where he gets noisy, looney, energetic, silly, and hyperactive, and unlike the book and film, he becomes so connected with the rabbits that he actually abandons his own kind to live with the rabbits as their secret weapon. He is first seen by the rabbits on their approach to the down, and is briefly befriended by Pipkin. Along the way, the rabbits raid Nuthanger Farm for flayrah, and see that he is being attacked by the farm cat, Tabitha. He and his friend Hannah the mouse are rescued by the rabbits. He and Hannah take the rabbits to Watership Down, where they decide to stay with the rabbits. He serves as the rabbits scout because of his ability to fly, and proves to be very useful in the fight against Woundwort. In the third season of the show, he takes temporary care of a hawk hatching named Skree, who he teaches to fly. He then leaves briefly to find a mate. When he returns, he has found a mate named Gluk, and eventually leaves the down for the city to live with her, not before promising to return with his future offspring.

Kehaar also appears in the miniseries.

He later fights General Woundwort and the Efrafans to give the Watership Down rabbits along with the ex-Efranfan rabbits time to escape, swooping out of the stormy sky and grabbing Woundwort and several of his officers by their scruffs with his beak and claws before tossing them a good distance away, sowing fear and confusion in the Efrafan ranks. After this, he returns to Big Water, promising to come back and check on his new friends when the cold times return, and joking that by then, maybe he will see several little Hazels. Kehaar last appears near the end of the film with Bigwig, Strawberry and their children, with the little rabbits finding worms for him.

Kehaar's relationship with Bigwig is shown to be much more complex than the others, as he often teases him by calling him "Plump Rabbit", to which Bigwig responds with anger. He is also shown to be less of a comic relief character and more straight talking and short-tempered than in previous adaptations. 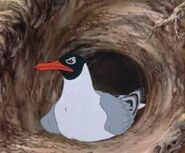 Kehaar telling Hazel to piss off

Kehaar with Hazel on a boat